REFERENCE GIRL: Why we need her now.

Founded by renown biologist and dedicated researcher, Mary Olson, GRIP was born in the independent finding that ionizing radiation (IR) has dramatically higher rates of harm to female bodies than to males.

Gender and Radiation Impact Project (GRIP) was born in the independent finding that ionizing radiation has dramatically higher rates of harm to female bodies than to males.1 GRIP is committed to deeper understanding of these differences, and to better radiation protection and exposure prevention for the entire life-cycle.

A first step would be to swap a Reference Girl for the Reference Man currently used by radiation regulators to define radiation harm, to calculate exposures and determine compliance with public safety requirements.

A year‐long project to create the parameters for Reference Girl, would include consultation with colleagues, drafting the proposed Reference as a first‐step towards greater radiation protection, and communicating this proposal. Deliverables include: documentation of expert consultations: paper to be submitted for publication; multiple blog posts during these processes;  webinar slides and recorded version.

“Finding these patterns does not make them new. Ionizing radiation inflicts disproportionate harm to girls and women compared to boys and men, and the
difference is not trivial. It is time to update policy to protect everyone better.” Mary Olson

GRIP is committed to deeper understanding of these differences and enhancing radiation protection and exposure prevention for the entire human life-cycle. 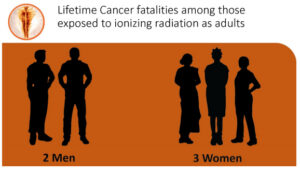 Reference Girl Matters.
Following the data clearly shows that her time is now.

“REFERENCE MAN” is used for generic evaluation of Ionizing Radiation (IR) impacts, industry regulation, and nuclear licensing decisions made by the US Nuclear Regulatory Commission (US NRC 2018), influencing it’s use and adaptation globally.

A portion of this work was published by Mary Olson under the title, ‘Atomic Radiation is More Harmful to Women’ (2011) and presented at: U.N. World Conference in Vienna on the Humanitarian Impacts of Nuclear Weapons. Olson, 2014

“Reference Man is used to predict cancer outcomes from a release of radioactivity, and this estimate is ten-times lower than if the regulators based their calculations on the impacts to a young girl. This means that global evaluation of the impact of radiation is off, way off. “ – Mary Olson

Ionizing radiation is hazardous. Very high levels are lethal and even a single radioactive emission has the potential to cause a fatal cancer, or loss of a pregnancy.

Atomic radiation is most harmful to young girls and females of every age have a higher risk of radiation harm than males of the same age. No public protection standard is based on girls. In the USA, regulations are based on a “Reference Man” who, it turns out, is the most radiation-resistant part of our lifecycle. Men are harmed by radiation, but less than everyone else—a lot less. There is as much as ten times more cancer caused by radiation in the women of the world because protection standards are not based on us.

GRIP will draft a proposal for “Reference Girl” in 2021, through a robust and documented consultative process, and introduce her to regulators at the global and national level. We’ll share her with anyone interested in better protection from the hazards of ionizing radiation, for this and future generations. Nonetheless…

Reference Girl is only a first step.

Continue for a more detailed description of the Reference Girl Project, or download the Published Paper…

The mission of the Gender and Radiation Impact Project (GRIP) is to: